As mentioned in the first article of this series, in this and the next article, we will dive deep into the compiler in order to understand how the magic happens behind the curtain.

It doesn't matter how experienced you are with coding, each of us started our journey with the familiar "Hello World" application. As simple as it may appear, there is a lot going on under the hood to get your application outputs "Hello World!" on the screen.

The C# compilation process is a two-stage process producing compiled code in three different states as shown below. 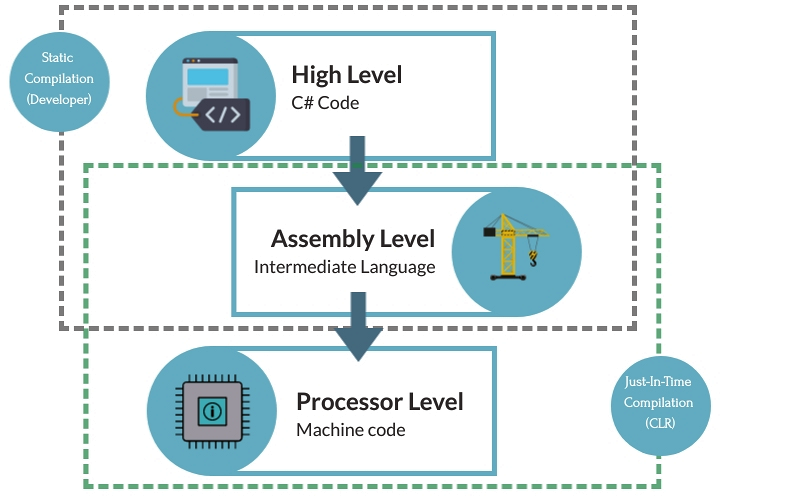 A combination of static compilation and JIT compilation is used to compile C# to machine code as described below.

You can build a program using either the csc.exe compiler program from a command prompt or by using Visual Studio IDE. Visual Studio uses Microsoft Build Engine (MSBuild) to load and build managed projects. It's more convenient since it knows where to find assemblies, references. etc. based on your solution and project files. MSBuild doesn't depend on Visual Studio. You can also run msbuild from the command prompt if you don't have Visual Studio IDE installed. So what is MSBuild?

MSBuild Engine is a platform for building applications. This engine provides an XML schema for a project file that controls how the build platform processes and builds software.

MSBuild uses an XML-based project file format (.csproj, .vbproj, etc.) that allows developers to describe the items that are to be built, and also how they are to be built for different OS and configurations via the four parts of MSBuild: properties, items, tasks, and targets. We will discuss the XML-based project file format in more detail later on by looking at an example. For now, all you need to know is that this file is what MSBuild Engine uses to build.

That's it for this blog post. In the next article, we will walk through a simple console application and dive into the compiled code in order to understand how everything is wired under the hood. Stay tuned!