You have probably heard of React in a discussion about other well-known JavaScript libraries and frameworks such as Vue, Angular, Ember, Webpack, Redux, etc. We will kick-start this series with a quick introduction to React in the first two articles of this series.

In this Part 1 article, we will:

Is it a library or a framework?

Before we get started on learning about React, I think it's important that we get this question answered because it has real consequences for our development process. And the answer to the million-dollar question is:

As a matter of fact, it's stated very clearly on their official website homepage.

React is written in JavaScript, but unlike other popular JavaScript frameworks such as Angular, Vue, Svelte, React is fundamentally unopinionated. But what does it even mean?

It means that React itself does not include many of the React-specific libraries you're going to need for most projects. The React and React DOM libraries give us the means of building a user interface with the JSX syntax, plus powerful state management tools via hooks, among other things. React does not enforce strict rules around code conventions or file organization allowing developer teams to set conventions that work best for them. Angular and Vue, by comparison, include many more tools all bundled within the core package itself.

For example, when you set up an Angular project, it is bootstrapped with nearly every single thing that you'll need to make a complete, large-scale app. Some built-in tools included in Angular are tools for common tasks such as creating forms, running automated tests, making network requests, etc.

That being said, it doesn't necessarily mean that React cannot be used to build complex and large-scale applications. However, the implication is that the burden is on you as a developer to choose the packages and tools that you need in order to build your applications. For example, React Hook Form or Formik are React-specific form libraries, React Testing Library and/or Jest can be used for automated testing, Fetch API or Axios can be used for making network requests.

The tools or libraries that you choose to use depend on the demands of the app and your preferences as a developer. This is one of the advantages of using React since it doesn't lock you into one choice or hold you to any specific libraries other than React itself. However, it does with a price because you will need to keep up with emerging libraries.

It's worth noting that there are frameworks out there that are based on React if you ever need it. Some of the most popular frameworks are Next.js, Gatsby, and Redwoord.js, all of which are used to create full-scale dynamic and static React applications.

React's mental model draws broadly on functional and object-oriented programming concepts and focuses on components as primary units for building with. In React applications, you create interfaces from components. React's rendering system manages these components and keeps the application view in sync for you.

Components often correspond to aspects of the user interface such as datepickers, headers, navbars, etc., but they can also take responsibility for things like client-side routing, data formatting, styling, and other responsibilities of a client-side application. Components in React follow a predictable lifecycle, can maintain their own internal state, and work with regular old JavaScript.

We will dive into these concepts in more detail in subsequent posts. For now, let's look at an overview of the major ingredients that go into a React application.

Since we were browsing the React homepage, let's take a look at some of the features of React listed on the homepage to understand what this library promises to deliver. 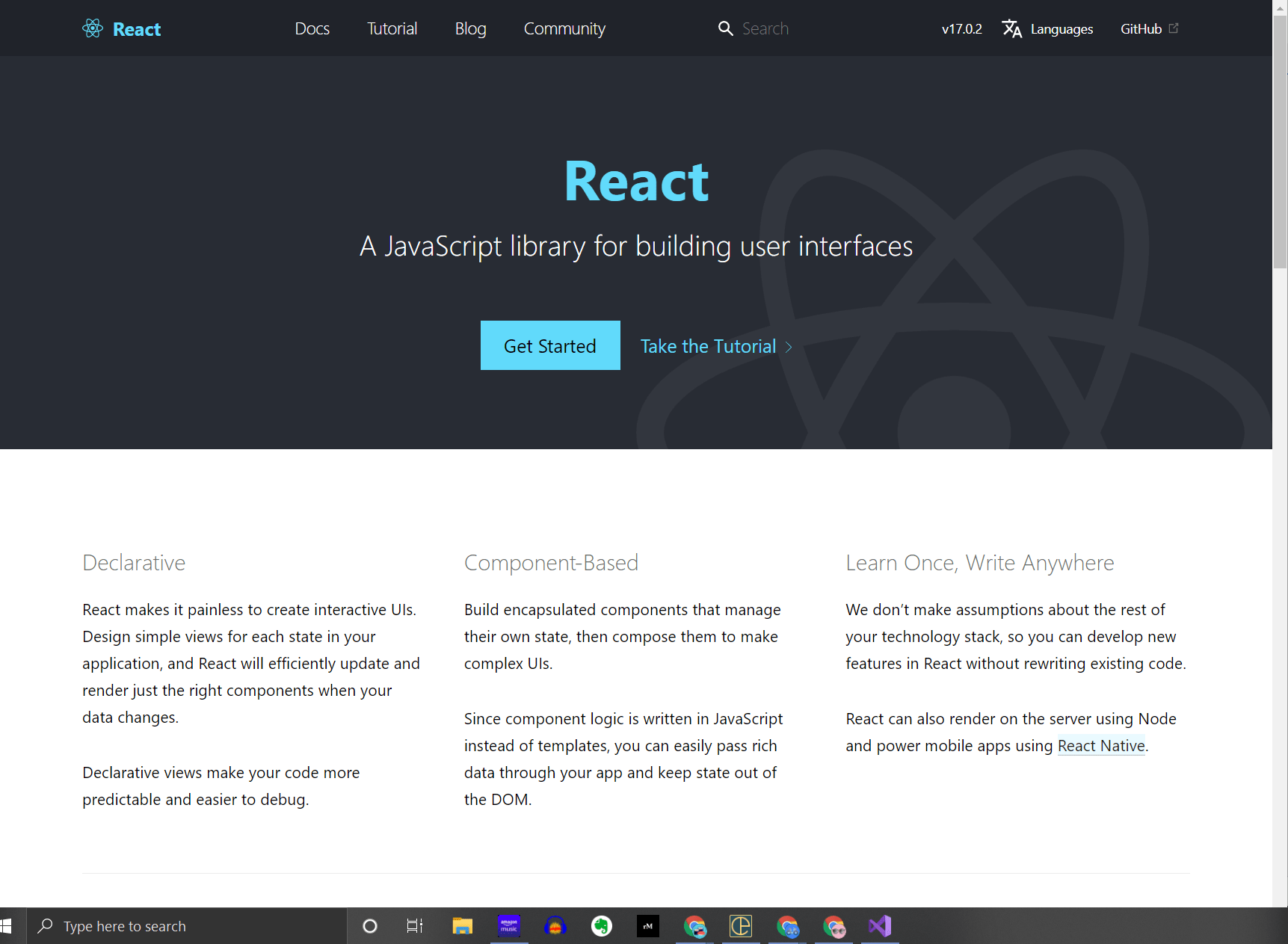 We will discuss these features at a high level and will dive deeper into the declarative and component-based concepts in the next article.

For the remainder of this series, we will explore each of the core concepts of React as shown in the diagram below. Of course, listed here are just the core concepts that are typically encountered when building a React application. As we dive into each of these concepts, we will also discuss other relevant concepts as they come up. 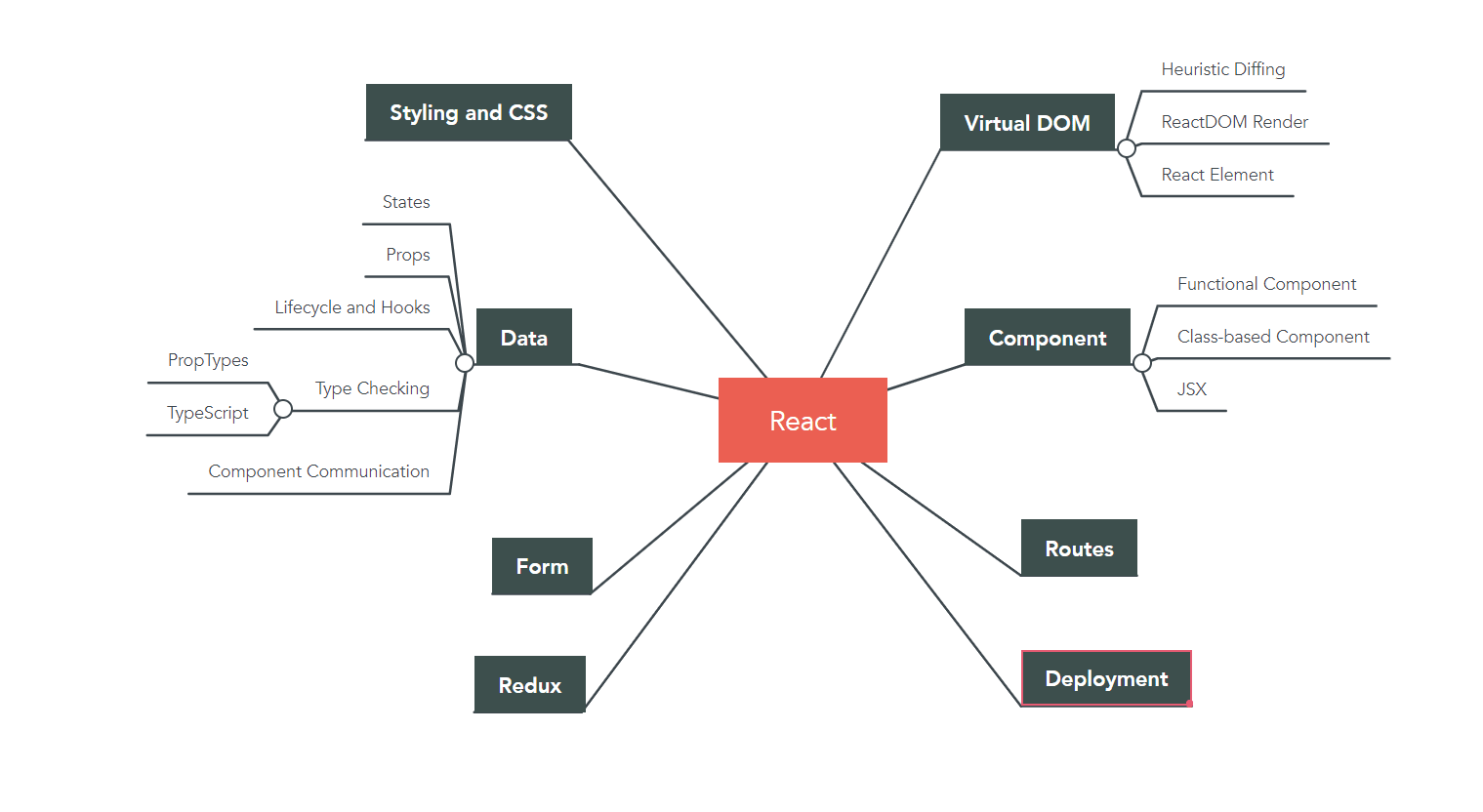